Sutskever was born in Smorgon, Belarus to a family of rabbis and scholars. When Abraham was one year old, during WWI, the Russians and Germans were at war in Smorgon and as the Germans retreated, they set four sides of the city ablaze. All of the Sutskevers fled to Siberia. His father died there in Omsk. His son later wrote: “My father at age 30 suffered a broken heart while he played Reb Levi Yitshok’s melody on his violin at twilight.” (1920). With Smorgon in ruins, Abraham’s mother fled with her children to Vilna. There she sent Abraham to religious school. Later he studied in a gymnasie and audited Polish Literature at University.

He began to write poetry in Hebrew in 1927 and and became a member, with other young writers of “Young Vilna”. When he went to Warsaw and was published there, he became a new star. He returned to Vilna and in 1941, when Nazis entered Vilna, he with others tried to flee to the Soviet Union but German planes and tanks made it impossible. He and his wife returned to his mother’s house in Vilna. His baby was killed in the Vilna Ghetto. His mother was killed in Ponar. He and his wife went into hiding – first in a chimney under a brass roof where under the shine of sun on brass, he wrote a series of poems called Penemer in Zumpn, (“Faces in Swamps”). Later he hidden by Janowa Baroshevich, a Christian woman in her cellar.

Another narrow escape was in the place used by the “Hevra Kadisha ” mortuary workers which was also where the Yudenrat, (“Jewish”) leaders met. While it was being inspected by Nazi occupiers, Sutskever climbed into a casket to hide. While lying there he composed the poem Ikh Lig In An Orun, (“I Lie in a Casket”) (Fragment below) 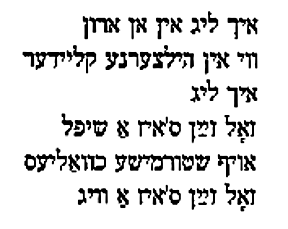 “I lie in a casket
as if clothed in wood
I lie
Let it be a boat
on stormy seas
Let it be a cradle”.

Sutskever was among a small group of writers and intellectuals that were chosen by the Germans to select Yiddish books, art and other valuable relics to be sent to Germany to be exhibited as evidence of destroyed Jewry. But Sutskever and co-workers collected these treasures to be rescued from the Germans by smuggling them back into the ghetto disguised as heating materials. Thus, in 1943, were Sholem Aleykhem’s manuscripts, letters of Gorki, Bialik, Romain Rolland, Dr. Herzl’s diary, paintings of Marc Chagall rescued. Sutskever’s own poem, “Kol Nidre”, also in 1943, was smuggled to Peretz Markish in Moscow where a special evening was held in the poet’s honor without revealing his name.

When, on September 12, 1943, word came that the Vilna Ghetto was to be liquidated, Sutskever and his group escaped from the Ghetto into the forests and there joined a group of Jewish Partisans called Nekome, (“Revenge”). In 1944, Russians sent a plane to take Sutskever to Moscow with his wife where he was treated as a hero. Later in 1946 he testified at the Nurenburg Trials against Goering, Hess, and Von Papen.

In 1947, he and Kayim Grade represented Yiddish literature at the International PEN writers congress in Zurich, Switzerland. There he met Golda Meir who arranged ship passage for Sutskever, his wife and daughter to Israel. In 1949 he began to edit Di Goldene Keyt, (“The Golden Chain”), the seminal literary quaterly of the best Yiddish writing.

In a book called A Shpigl in Shteyn, (“A Mirror in Stone”), Sutskever selected the works of the twelve greatest Soviet Jewish writers that were murdered by the Stalin regime. Among them were M. Kulbak, Izi Kharik, D. Hofshteyn, Perets Markish, Leyb Kvitko, Itzik Fefer, David Bergelson and Der Nister.

Sutskever’s books have been translated to Hebrew, French, German, Spanish, Italian, Russian. He has won major international literary prizes. S. Niger writes of him, “His people’s eternal way lives in him since the beginning of WWII. And if Yiddish poetry would not give Jews one more thing except A. Sutzkever’s creations, that alone would not allow them to forget the eternity of their journey.”