The Jewish Community Defending Against Deprivation

[The damage in the first paragraph prevents exact translation but it appears that while working with the papers that have been damaged in the Ringelblum Archives, the workers tell each other “Don’t read now”, but one really wants to look into the papers that one is working with- it is hard to resist. One of the coworkers from Krakow during the few weeks he worked with us became a bit of a specialist able to identify precisely the source of the printing by the colors of the particular hectographed material.]

One meets a mass of Yiddish publishing. There are complete Ghetto newspapers in the Yiddish language and also miniature printings of Polish press. Jetchpospolita – Bulletin [illegible] Informatsini and so on.

One even finds issues of the German underground “Hammer” and German “Freedom […]”, radiograms of […] note pads of Soviet Newspapers, clippings and typed bulletins [reporting] Moscow Radio. Right before your eyes are the various sources which interested Dr. Ringelblum. One finds in each box things more interesting than in the other.

There are very interesting and dramatic reports from the countryside provinces, reports from and correspondence from the Yiddish Self  Help from cities and villages that we have already by now forgotten their existence. There are descriptions from the provinces, and from Jews who ran away or were chased out into Warsaw.

For instance, here is an eye witness account from the tiny village Laskazjev. I myself have recorded a story told me by a young man named David Vintsiner, a remarkable member of the Folk Kitchen at 40 Leshno. I have not established yet if this is the same protocol that I did but the story – a characteristic one for the first year of occupation is so:

In Laskezjev in the year 1939 when the German Patrols marched in, a free Polish volunteer group located in a church tower shot 27 Germans. The Germans thought the shooters were trained soldiers from the Polish Army. They, the German leadership ordered a withdrawal and began an almost regular bombarding of this village from the air and from the ground. After conquering the “fort” they carried out a pacification program in Laskazjev as only they can. Right away they projected their anger toward the Jews. They burned down the area. They shot many men. Of the whole place not more than two houses remained in which there remained in which were left ten to fifteen Jewish families. The Germans however did not forget about them and carried out a revenge reckoning of death and on the exact date of the deaths of the German soldiers one year later, they raided the two houses where the Jews were, took twenty seven men supposedly for work, led them into a nearby forest, told them to dig ditches, shot them all, and threw them into the ditch, some of them still alive and buried them. A young man who survived with a shot through his palate, got out of the grave. He was brought to Warsaw, later had an operation and told the details of this dramatic scene that follows. The story that follows is between the Germans and a Jew who was a baker and a father of three sons.

They took the baker while he was standing at his work, in his flour covered apron, with his shirt sleeves rolled up and both hands covered with dough. When he saw what was about to happen, he turned to the officer, pointed to his three sons and asked that at least one be allowed to live so that his whole house would not be extinguished.

“Good”, the German officer replied. “But show me the one that you wish to remain alive”.

The Jew stood distraught, silent, thinking. A terrible struggle must have occurred in his soul. Finally he pointed to one of his three sons.

That son was the one the officer shot first.

The most varied material comes into our hands.

Here for instance is a placard for Piotrokov dated at the end of 1939, signed by the local Jewish Elder. He announces to the Jewish population that several trains will be leaving for the Soviet Union and anyone who wishes will be allowed to sign up to ride free. One is allowed to take 25 kilos of baggage as well as gold and jewelry. The theme of this recalls the text of the Warsaw expulsion July 22, 1942, when Jews were “allowed” to take along to the Treblinka death camp gold and jewelry. But then in 1939 it did not yet end quite so tragically. There were some Jews then in Piotrikov that appeared for the journey. They were gathered in and held for some time, robbed, physically beaten up, made fun of as “the communists who want to run to Stalin”. And in the end they were let go. Much worse was the ending for several thousand men of Khelm and Horobieshov during the march to the Soviet Border. Eighty percent of them were shot and killed. There is a report of this from winter 1940. This story is one of thousands which happened to Jews in those years. The later the dates, the more frequent, and the more gruesome [the events] Until the stories move from the end of 1941 to the beginning of 1942 when they move out, back to the first plan (of total genocide).

We have this sentence from a Polish card about a group of Jews expelled from a Polish village who find themselves on their way and don’t know where they are being taken later.

In Warsaw it was already well understood where such transports were going, at least in the circles of “Oneg Shabbes”. Besides the articles in the secret underground press about the Khelm vehicles for gassing we had in the Archive an original source of these ideas from a Khelm man, a runaway from a cemetery work crew, a Jew whose work was removing the corpses that had been gassed. In the Warsaw Ghetto Archive there were already in the beginning of winter 1941-1942, the most specific witness testimonies about the secret of the Palace in Khelm and of the locked autos that speeded across the highway in the direction of the nearest forest…

The news that one finds in the Jewish Archive accurately agrees with the results of independent research of the Polish Commission which was done in 1945.

Documents of the German Persecution and the Jewish Martyrology.

But among the Archive materials we find also documents of different character.

Here we read in the German language a typed copy of the “Department Office to Fight Usury and Sex Trafficking in the Jewish quarter of Warsaw”. A document of the sadly famous “Three Tenths” gang of blackmailers and trouble makers that had their location on Leshno 13, under the leadership of “Editor” Gantsveikh.  Without a doubt more materials will be found in the Archive about this group of low-lifes and evildoers as well as other German agents and confidants with names and with facts.

A small notebook in Polish from the year 1941 concerns itself with the most popular of these contemptible fellows.

There was an eye that was vigilant protecting morality. In the darkest of times, so that in a better time the harm and injustice could be seen and cleared away.

There was a hand that recorded for history both the wisdom and the readiness to put one’s life in danger. Jewish society changed and prepared for deprivation. The secret Archive was her voice.

The facts recorded here and there, the large number of documents of moral decline cannot weaken the picture of the frightening martyrology of the Jewish masses and most certainly the picture of true heroism which rose in the people in this darkest of times.

Next article: It was Still Warsaw 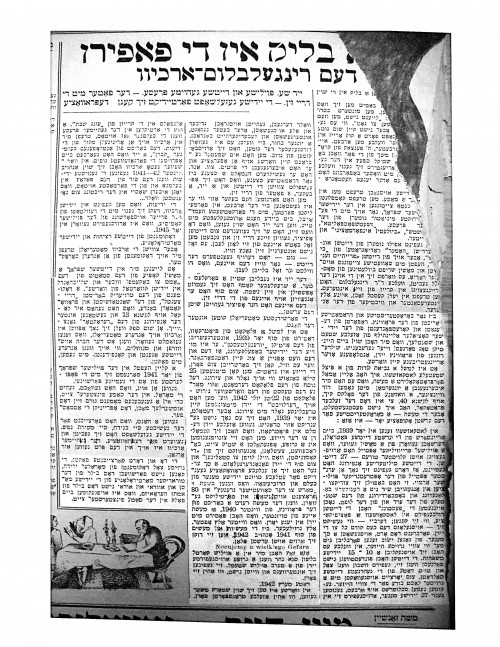