Previous article: This is How It Started

1942:  On the eleventh day of the first big banishment action (in truth “extermination action” Ringelblum gives his explanation). Also his two young helpers, one time students there at the Borokhov School which was located before the war on Novolipki 68, have added to the materials that were buried that night, notebooks with short descriptions of previous exterminations from a week and a half ago and added their own wills.

The eighteen year old Nokham Grzsvatch writes “we have decided to describe the present time. Yesterday we sat until late into the night because we did not know if we would live ’til today, I am in the middle of writing and there is terrible shooting going on in the street… One thing I am proud of: that in the worst fated days I was one of those who buried the treasure…in the days when there was shooting. These materials were hidden, so that you could know about the suffering and murder of the Hitler tyranny”…

And the nineteen year old very talented David Gruber, who with the maturity of a man who stands on the eve of an early death, wrote this: “We must hurry because we are not secure in this hour. Yesterday we worked until late into the night… I want the coming generations to remember our time, so that in a liberated socialist world our suffering and pain will be remembered, so that in the time of sinking, going under there existed people who had the courage to do this kind of work…with what energy we dug ditches for the containers…with what joy we picked up every new material we felt to be our responsibility, we were not afraid for the risk. We understood that we are creating a piece of history, and this is more important than single lives… Where the treasure is buried is a secret. We will never tell even if we are cut and tortured. I would love to live to see the moment when the treasure can be unearthed and to shout the truth… We will certainly not live to see better times. Let it alarm the world: what has happened in the twentieth century.

And at the end this nineteen year old adds “We can die now in peace. We have done our duty – carried the message”.

I too, on the fifth day of the “action” the twenty sixth of July, 1942, while giving a package of writing to the archive, put in a will. I had the good fortune to “live to see” the unearthing and hold in my hand writing from those black days. But I don’t want to cite my will here but want to contribute something I have found in my unearthed notebook:

“We find ourselves still now in very thick darkness of German polar night. We cannot see the light of dawn. We ride through a terribly long dark tunnel. We go forward, but who of us will live to arrive at the second shore out of darkness?

And maybe we are just passengers on a sinking ship? We see the bizarre and most frightening things, but who knows if these pictures that we see now will go down and disappear together with us, the way the pictures of panic disappear on a sinking ship; in a burning house from which no one can run away. In a coal mine during a catastrophe, among those buried alive. It could happen that not even one witness will survive to tell our tragedy — so let the witnesses be our descriptions….”

That was the perspective. We wrote, collected, guarded and hid while in the circumstances of our own destruction. We prepared the register of our own suffering and death not for ourselves but for other Jews. For the Jewish community of the wide world.

And the perspective was a correct one. As terrible as our expectations were, that which actually happened later was even more terrible. The train in which we rode through the tunnel endured a frightful catastrophe. There were very, very few survivors. The memories of those who survived are often hurt and broken as their lives. That is why the most believable witness will be the written, printed, hectographed word from those years, which has now in great abundance been dug up from under the ruins of the Warsaw Ghetto.

Next article: How the Ringelblum Archive Was Unearthed 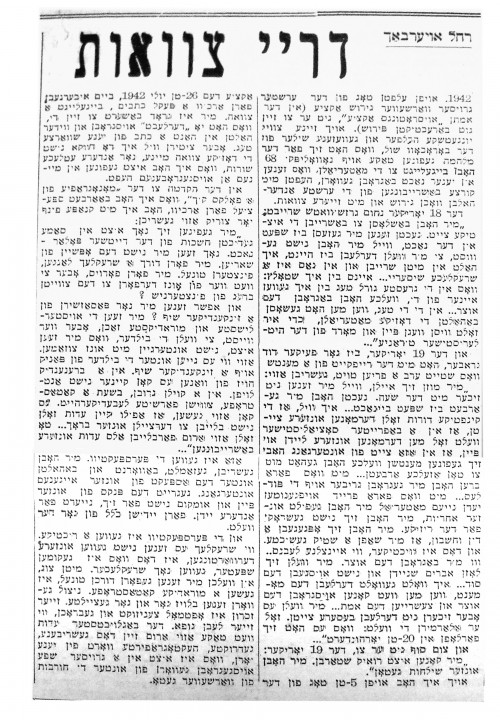