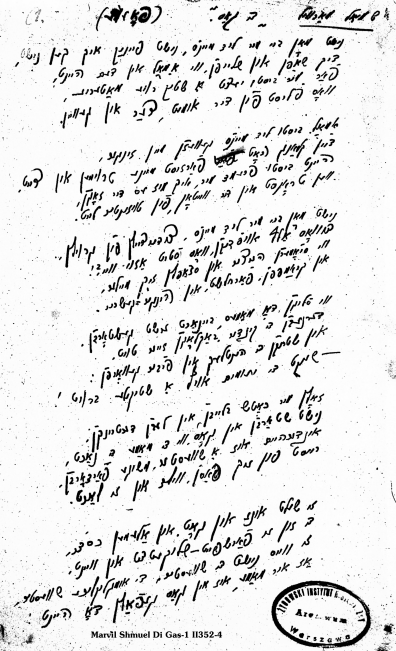 The Street
by Shmuel Marvil

My poem, don’t urge me, I cannot anguish,
to create and craft you as I did, long ago,
For me you are now a piece of raw suffering,
flowing with grief, tears and sorrow.

Once, my song, you were my singer,
the sound of you sweetened my dreams and my time,
This I must tell you, today you’re a stranger,
who carries the suffering of thousands of lives.

Don’t ask me my poem, to recount the horrors,
What’s the use to uncover unbearable pain?!
how hearts lament and mouths quiver
faint with cramps and screaming hunger.

Here, at night, mothers just passed away lie.
Nearby their children mourn them and cry
and stretch out fevered small hands as they sit by the dead:
-oh give the orphans a small piece of bread!

Let us at least remain drowning in life,
not to die in the street as did mother this night,
our sister at home is crazy, depraved,
laughs and tears at herself in wild fits of rage.

She spews endless curses on God and us all,
she spits at the sun, hiccups and sobs,
she, the afflicted one, has no idea
that today her mother fell dead in this street 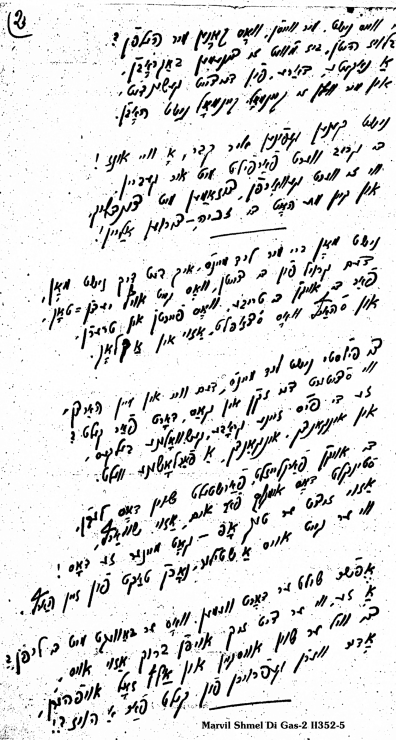 She knows not, but we know, and what can we do?
Only stand by and watch ’til they take her away
so naked and thin and ruined by time,
and we will not have her ever again.

Woe to us we won’t find her grave!
in a pit she’ll be thrown with ten score of bones
so many together, young, old, fathers, mothers.
none has sacred honor to rest alone.

Don’t beg of me poem, I beg you don’t ask,
the horror of these times permeates every task,
before sad misty eyes welling with tears,
and the heart that trembles in a vise of fear.

Poem, do you not feel my heart’s deep woe
to see the old man in the street shivering with cold?
feet heavy, his legs swollen columns so thick,
and everywhere, the whole world extinguished.

The eyes that are glazed are now hiding his life,
misfortune darkens all before him so black,
he sits so for days, – My God see this!
how he dies in silence with the beat of his heart.

Perhaps when his lips move he curses someone?
Oh see how he stretches out down on the rubble,
does he want to die so all will be over?
or become numb and frozen in front of a house? 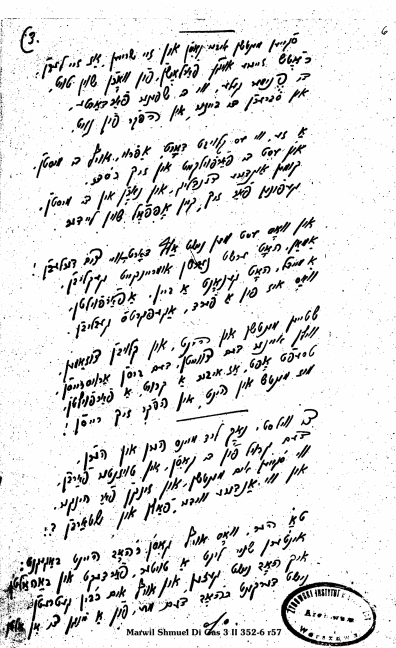 Roaming the streets people shout they’re alive,
though weeks ago light has gone out of their eyes,
their faces are yellowed like dried splintered wood,
and their bones break on the rack of dire need.

Oh see how the woman there picks at the garbage,
and keeps on eating the rot that she finds.
Scores of others come too to forage in garbage,
but sadly for them no dregs remain.

And what won’t they eat there – oh woe to behold this!
A man was seen yesterday collecting foul stuff,
A girl was gnawing a bone that had rotted,
all that was left from a horse’s remains.

Dogs and people stand foraging together,
want to tear pieces from each others mouths,
so it happens often over cabbage that’s rotten,
man and dog will stand fighting it out!

Do you my poem still want to hear more,
the dread in the streets in thousands of hues,
how people still walking are sinking from hunger,
and others just fall as they die and go under?

So listen to what I encountered today:
under the snow a hidden corpse lay
I did not see him, and on him I stepped,
and I could not tell if he was young or old. 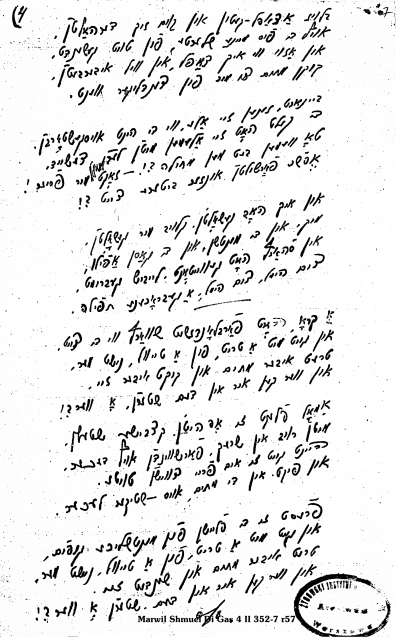 I trembled and hardly could hold together,
on my bad feet already ruined by death,
I begin to shake, want to apologize,
Staring from walls all around are corpses eyes.

At night they all had died like dogs.
The icy cold took them away from their lives,
So for whom my apology?! – Tell me who should be first!
Maybe just curse our bitter time?!

And I did curse. Believe me I cursed,
myself and the people and even the streets,
and my aching heart growled like a lion,
a broken prayer to the sky, the sky.

A crow wandered in lost, black as time,
and walks with the strut of a demon no less,
walks over the corpses and looks them over,
and who can disturb her in this, oh who?!

In times past she’d watch the stalls of the butchers,
and in fright disappear on the roofs like smoke.
Today she strides freely around on dead people,
and pecks at their bodies – makes big gaping holes.

She gorges on meat of human bodies,
and walks with the steps of a devil no less,
stepping on bodies, befouling them.
And who can disturb her in this, oh who?! 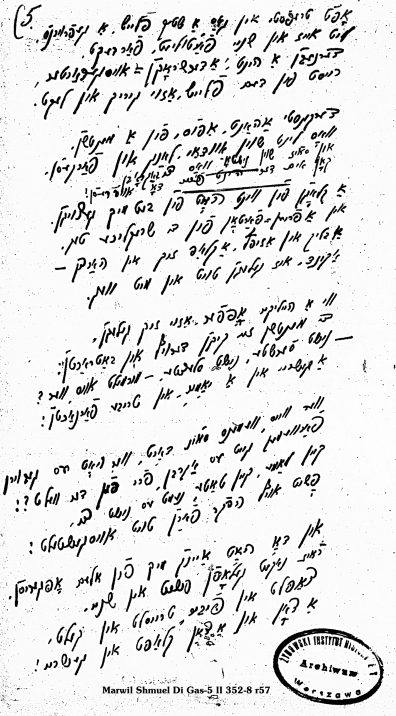 Often one encounters a chunk that is frozen,
covered and swaddled in ice and in snow,
nearby a dog, frightened and scrawny,
tears at the meat and eagerly licks.

You recognize the hand, the foot of a person,
that has been lying long and forgotten,
and there is not enough left for burial,
so the dog can freely tear and feed.

The wailing wind roused me from bed
at dawn of one of these terrible days
A look and a sigh, a blow to my heart –
a child in mid street lay dead.

Like a holy offering he laid himself down,
people look on at this and reflect,
– not the first, not the last, – someone mumbles, who?
a scream and a cry in bleak twighlight:

Who knows whose this is there? Who gave birth to it?
for whom too soon sacrificed from this world?!
No mother, no father, no one comes to claim it,
just simply abandoned to death!

And here something tore me away from it all
A man, stark naked running out in the snow
trembling with fever, shaking with cold
teeth rattling and shouting! 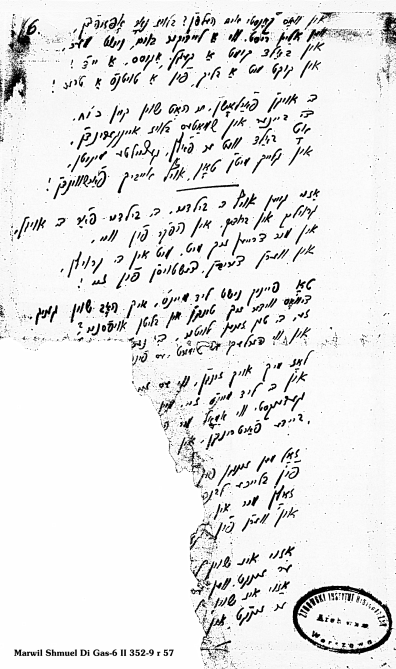 And how can you help him? One can only sigh,
when you too are as a tree that’s been stripped?
And soon there comes toward you a Jew!
and looks at you with a tear of death!

His eye light has vanished and so has his strength.
His bones are wrapped only in rags,
soon he will fall, in just minutes,
and vanish forever with the sound of his fall!
__________________
So rise these pictures before my eyes,
Gruesome abandonment suffering pain,
And we go around spinning in horror,
pushed and crushed by them in the time that remains!

So don’t torture me poem, I’ve had enough
Why submerge under blood anew?
See how clear the days are, the nights

Let my singing
of pale moon
Let us,
and become of

So and
He
So is when
He