Previous article: A Look Into The Papers of the Ringelblum Archives

Documents of Passive and Active Resistance
In the Ringelblum Archive

[The damage in the first paragraph allows only the following phrases to be partially deciphered.]

and under their auspices also political activity and cultural work.

In the grip of hunger and danger, choked and persecuted, the condemned to death Jewish mass organism has with an immense power of resistance struggled for its survival, for its physical existence, for its moral worth, for its inner wholeness. Not with defeatism and prostration has the conscious Jewish society — just like the Jewish folk masses of Warsaw and all of Poland — answered back for the terrible situation, into which they fell on the first day of the German occupation. In a situation in which other people would have perhaps fallen into break-down, in a situation in which maybe Jews in other countries might have fallen into panic, into suicidal psychosis, the Polish Jews strengthened themselves, girded themselves with hope and faith and belief in the triumph of justice which must eventually win, in salvation that must come.

Why don’t Jews jump by the hundreds every day from high floors?-the Germans asked. They knew that the Viennese Jews were already, while still free, committing suicide en mass when they came under Hitler rule.

Varum verden di Juden nicht vanginik. “Why don’t the Jews go insane?” a German policeman screamed out once while watching the action, seeing what was happening to them in the ghetto. We now know how the German masses broke down in fear in the early part of their defeat. But the Warsaw Jews, the Polish Jews struggled, and did not become totally broken for one moment.

An important countermeasure against defeatism and despair was activity, whether or not it helped a lot to conquer the catastrophic situation. In any case it helped inwardly. It went hand in hand with Jewish optimism.

Because it is not only important if one saved oneself or if one died.  But in a time of mass death it also important how one dies. “The Art of Dying”, that means dying with honor – a Polish writer called his book about the time of occupation in Poland. [Reference: Zenon SKIERSKI, “Sztuka umierania: nowele” (The Art of Dying), Krakow, Z.Kaminski, 1946.]

The huge mass of materials that gives a picture of the Jewish institutions in which all Jewish intellectuals were involved, the large number of serious studies about actual problems, statistically and psycho-social works about the Jewish population during the occupation; the reports of social and cultural events, of secret school courses, the texts of the songs that were composed and sung in the ghetto, with sarcasm targeting the Germans and their collaborators, the variety of jokes and puns about the unavoidable German defeat, the songs of faith that were sung by half-dead starving people —- all is collected in the Ringelblum Archive. These are all documents of Passive Resistance through which Polish Jewry stood up against the bestial persecutions, the unprecedented extermination, the satanic attacks in its existence.

When everything will be excavated, there will be found the materials that also document the last struggle — the era of Active Resistance. Its development is mirrored in the diverse already found documents of the active underground political activity in the ghetto. The materials already partly found in the hidden tins together with the materials that are already available and will still come up regarding the Jewish uprising in Warsaw will round out the documentation of Jewish active resistance. The papers will tell everything.

The papers that rose up from the dead will tell their worth. They will report their eye- witnessing of Jewish martyrdom and Jewish heroism, about the murder madness of the hangmen and of the suffering of their victims, of Jewish self-sacrifice, about the rising up and descent of the Jewish person. Also about falling, about everything.

They are the true chronicles of Polish Jewry in its most difficult times. This is the chronicle of its disaster and struggle. 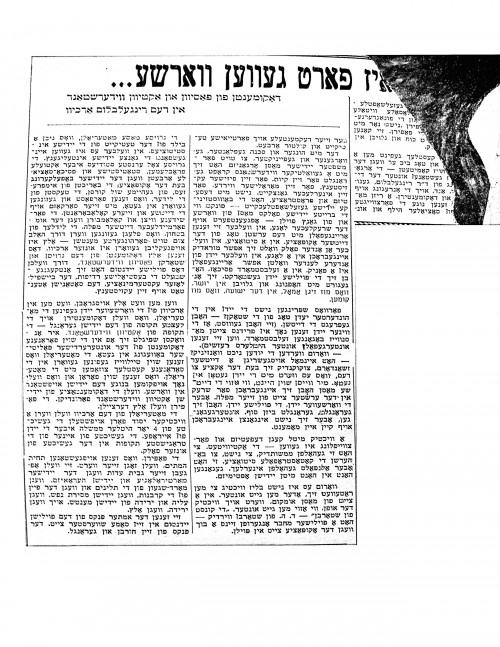