Previous article: How the Ringelblum Archive Was Unearthed

[… the papers] and professor Leonard is their doctor. We open […] a laboratory to conserve documents.

[We found out] that an hour ago that [there were found] two new tin boxes which [were there on]Novaleski 68. Together there are [8] boxes. We obtain a motor [car to transport them] across the ghetto. After [illegible] covered cellars. After consulting [architect Pleschinski]  about the [unearthed] &emdash; after a series of receptions for “Polski Films” we meet with the [illegible] Committee. After the first [great joy], over winning back a part of the [illegible] Archive, we almost fall back into a depression.

Will we have anything from these materials? Some of the tin boxes are pouring water. They are terribly heavy. We don’t really know if these materials can be restored. What should generally be done with these boxes? It is frightening to open them. Maybe the air can harm these wet papers? Until now they were without access to air and were lying in the wetness and full of fungus. They were still not entirely moldy and rotten. But now will the devastation process  proceed with manifold intensity? We decided to seek advice from the director of the National Museums.

One day we brought from the Zacheta Museum, Professor Leonard, a rare specialist, one of the few in Europe – an conservation expert of old handwritten script and books. He specializes is parchment and paper writing and printed things from the middle ages up until the eighteenth century. He has been in this work for more than forty years. In handwriting and print from the 19th and 20th century he has been working “only” ten years.

Professor Leonard begins for us a brief presentation on “younger” paper and types of ink, about the destroyers of paper, about parasites and mold, about atmospheric changes affecting the transporting of our boxes. We became entranced. We become dependent. We obey instructions of Professor Leonard about aseptic methods that should be applied to protect our manuscripts , so that they don’t infect each other; so that they don’t infect healthy paper that will come in their environment.

We never imagined so many problems could be involved with such a simple thing as drying out papers that have been part of dug up treasure.

The important core for us was the practical advice on how to organize a laboratory to preserve these things. We were given a list of instruments and materials that we have to buy. Professor Leonard tells us to put up special stands with shelves for drying the papers, to buy a hygroscope to measure the moisture in the air, install an electric heater to regulate the temperature. The old professor promises to come a couple of times a week to see how we are working and give us lectures to educate our co-workers.

Because of this orientation we cut the ropes of two tin boxes.

And it becomes bright before our eyes &emdash; and dark before our eyes. We will have to open these boxes with a tin scissors like one cuts a sleeve, or a house, or to bandage a wounded organ. The papers “have no strength” that would permit us to take them out of the box.

Some of the papers that Professor Leonard left inside a handbook are stuck together. We recognize a pack of violet note pads and look to each other the recognizem them as what Archive secretary Eliahu Gutkowski would hand out to the co-workers of “Oneg Shabbes”. In the second box on top there lies a small handbag. Instead of opening from the front it opens from the back and inside it there appears Yiddish typed script. We breathe with relief. Every single letter is readable. Meanwhile one must not touch one page.

We tremble that the script which we see before our eyes should not fall apart in ash and dust as we look. Not disappear like a mirage. Around the walls of the box wrapped in torn parchment paper there is a brown and white packing, like brown cotton.

Aha! We think, that is probably a type of wool to protect the papers from wetness.

Foolishness-Professor Leonard explains- these are terrific fungal colonies that can spread now like yeast in warmth. Therefore, do your best to take care that this “disease” does not spread. When you take the papers out, brush these brown things into a basket in a mixture of sharp soda, so that this fungus seed is instantly killed.

And now we have an orderly laboratory. Far from the ideal operation that Professor Leonard described but in which we can still prove to be accomplished.

The Central Committee gave us for this purpose one of its largest rooms, a hall with four windows on the first floor of a building at Shienga 60.

There are three rows of tables. In the beginning we had brought the unearthed tins into this hall. Then we carried them into a separate cooled room which receives no sunlight. In the large hall we have only the materials being worked on.

The head of the laboratory is now Dr. Laura Eikhorn-a co-worker of the Cracow Historic Commission. In her possession is the key to the hall. All the doors are locked. The door is opened every morning at nine o’clock when people come to work and locked at four o’clock when people leave work. Also the small cold room containing all the tins is locked. The archive is seen as a national treasure in which all social and political Jewish factions are interested. It must be an absolute rule that no unauthorized person has access to it.

The main tools for work are special small sharp knives. The most important materials are bandages and cotton is a movable filtration cart, blotting paper and paper to cut into fourths and eights – and also packing paper.

Patience – Patience – The most important thing Professor Leonard taught us is patience.

And now, 4-5 and later 8 people sit bent over tables at work. In front of each of them is a pad of paper, or a machine typed copy. Each one holds a small wand in their hand, separating carefully one page from the other, putting between them mostly wet paper…blotting paper- between the more tender, weaker paper, filtered transparent papers and  between them the least harmed papers, just damp, ordinary papers. The most difficult hardest to handle are handed over to the most patient hands of a bibliophile and art connoisseur, Joseph Sandel, who has worked with us here from the first day of the Archive conservation project.

Drying these papers too fast must not be done. On another day they inserted blotting papers laid in at first are changed when the papers are well dried out they are separated out on great folders on the floor to be totally dried. For this stage one should really have a press or iron to completely dry, flatten and straighten out the papers. Such a press we unfortunately do not yet own. For collating and handing over the papers to inventory, they are cleaned further with a pencil, and examined to see if there remains anywhere on them a trace of green or black mold,-dust that could be seeds for a new disease process.

The papers are now ready to be “registered”. 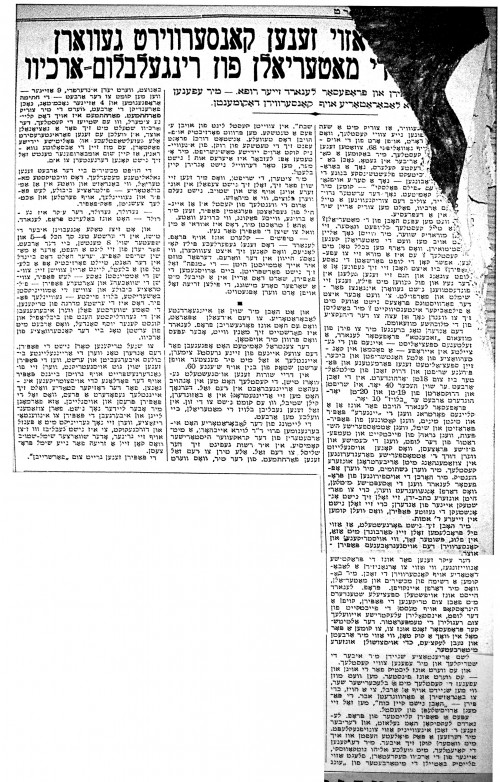